Greetings snacklings.  Today, I thought we’d take a peek behind the curtain here at Food Junk Studios to see what exactly goes into producing a post.  An FJ1’s Behind the Snacks if you will.  And you will.  And just like the VH1 show, there will be some drug abuse.

It all starts with a product.  These days, I try to aim for the new or the novel.  I enjoy playing in the realm of the unusual.  The remarkable.  The pop culture tie-in products.  The bizarre foreign limited editions.  The vintage, no longer available relics.  The resurrected.

Once I obtain the perfect snack subject, I set up in my photo studio.  My studio is custom built.  Many contractors were contacted, many photographers were consulted before deciding on its ultimate design.

Ok, so my studio might be a wooden cutting board laid across my kitchen sink.

Why?  It’s all about the lighting.  The windows in my apartment face north, so in general it’s a dark cave at almost any hour of the day.  If you look back at some early posts, I tried a few locations hoping to capture some natural light, but that proved impractical.  I considered buying a small light tent (like a grownup would), but then I discovered the bright white fluorescent light above the aforementioned sink. I haven’t looked back since.

The star of every photo session…you know him…you love him…The Snack Trooper!  Using my Clone Trooper was an idea I had from the very beginning.  I’d like to think it was a grand moment of inspiration, but really, I just thought it would be funny to take pictures of an action figure posing with food.  I still think it is.

Food Junk trivia factoid #2:  There have been two Snack Troopers.  Sadly, the original lost a hand a few months ago.  Looking back, the accident now seems inevitable.  But when a 3 and ¾ inch friend of yours is in the throes of Ketchup Salt and pastry-based alcohol addiction, you find yourself trying to ignore the signs.

After the accident, the original Snack Trooper retired from modeling, though he still works in the Food Junk corporate offices.  Mostly clerical work.  He is currently working the steps to overcome his history with substance abuse.

See, I told you there’d be some drug stuff.

Photo sessions usually take about 20 minutes.  Unless I can’t get the little bastard to stand up right.  Or if I can’t think of a pose.  And sometimes I really can’t.  I fear I may be running out of poses.  What do I do then?  Shut it down?  Start a new blog?  Bring in a vintage Porkins for posing support?

Food Junk trivia factoid #3: All drinks are photographed using a shot glass I stole from the Robin Hood, a diner/bar in Livingston Manor, New York. I patronized this place frequently in my previously mentioned camp counselor days.  It is the simplest and purest shot glass in my collection which was amassed during my adventures in Food Junk: The College Years.

Once the snacks are opened for photographing, tasting is quick to follow.  Rarely do I finish a whole snack or drink at a single sitting, and frequently does my dogfriend Windsor get to sample the goods.  I like to think he runs a very niche, human food blog for dogs when I’m in bed.  (Note to self: movie idea. Talking dogs who blog in secret. Possibly discover food conspiracy.  Maggie Gyllenhaal plays a droopy-faced bloodhound.  Special effects not required.) 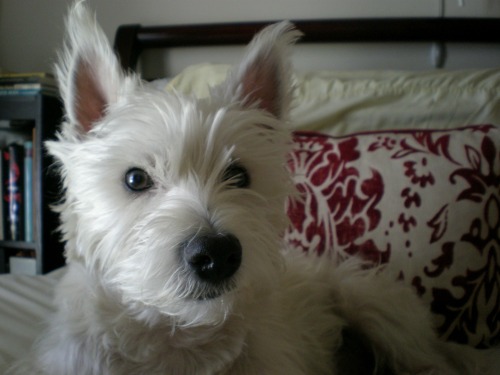 Then comes the review.  What I love about writing is the sudden Matrix moment where every idea becomes clear and connected, and you know immediately how everything is going to fit together, and  it’s so awesome that you start doing shirtless kung fu moves while your wife’s asleep.  There’s nothing better.

Then there are the instances where I have absolutely nothing.  For days.  Nothing.  Not one pathetic shred of an idea.  No connections.  No references.  Not even a frame story.  Frame stories are the name I have given to my often pointless non-food related ramblings that I wrap my little reviews in.  Really, have you ever compared the total number of words in one of my reviews with the number of words actually about food?  It’s ridiculous.

I’ve never abandoned a review due to writer’s block, but that’s not to say I wouldn’t.  Stranger things have happened (dog blogging).

Tehn, of coarse, the edditing, both photo and textual.  After that, everything is uploaded and smeared across various social media outlets, and I wait with bated breath, hoping to wake up the following morning to a few nice comments from you, my beloved reader.

I’d love to blather on some more about my thoughts on creativity or writing or motivation, but I’m starting to feel self-conscious about how self-centered this is, and great Odin’s ravens, this post is out-of-control long already.  If you stuck it out this far, good on you.

Let’s get to the snack.  You may have forgotten there was going to be a review today.

But here it is, all the way from Japan, Maxim Oreo Cappuccino Instant Drink Mix.  It’s made by Maxim Stick Menu.  I think that’s the company.  Or maybe Maxim is the company and Stick Menu is the product line?  I dunno.  They make other drink mixes like Matcha Latte and Strawberry Latte.

This was a new experience for me, in that, this was the first Japanese product I ordered because I thought it would actually taste really good.  When I go for the chips or the sodas, I never know what to expect.  I think some might be ok or even fairly decent, but never really good.  I was hoping this would be really good.

The nosegrope was not very exciting.  It smelled of your run-of-the-mill, Swiss Miss or comparable hot cocoa mix.

The taste itself was also rather unremarkable.  Instead of the beautiful blend of the essences of Oreo and coffee that I was hoping for, it was just some cocoa mix with a slight bent toward a darker chocolate.  On the plus side, it’s not an overly sweet, which was nice. This seems to be aimed at an adult audience.

I certainly didn’t taste any of the coffee flavor implied by the cappuccino mention.  Though if they produce a Strawberry Latte drink which I’m assuming isn’t coffee flavored, then perhaps “cappuccino” might just be referring to any creamy or frothy drink.  Seems a devil may care.

Being raised in the U.S. and deprived of familiarity with the metric system, I had to look up the amount of water I needed to add to the mix.  Turns out, 130 milliliters is about 4.5 ounces.  Yes, 4.5 ounces.  Adorable to be sure, but as an American it felt like a sample cup one would receive at a grocery store.  The low water to mix ratio did provide a nice, thick, creamy beverage, but on my second helping, I upped the water to one cup, using only one packet of mix. The flavors and consistency suffered a little but not too much.

There’s nothing wrong with this cocoa mix.  But it was decidedly underwhelming.  I have two sticks left, so if you’d like to share in the uninspiration of this product, let me know in the comments.  I’ll send a stick out to the first two comment requests.

Total number of words in this review: 1354