I’m not a fan of people who buy up all the stock of a product in order to re-sell those products for exorbitant prices. I don’t know what the term is for people who do that? Flippers? Re-sellers? Funko Pop enthusiasts?

As a Disney Parks fan, I see it happen a lot. Something gets released on Disney property here in Florida, people line up with all their friends to buy the maximum amount a store will allow, and then they list the products online for obnoxious prices to exploit those fans who aren’t so geographically privileged.

It’s not like collecting and dealing in collectibles or antiques where there is knowledge involved and the actual tracking down of the product requires work. Like what those guys on American Pickers do. (Are they still a thing? I don’t have cable anymore.) Clicking a button online or lining up at store, doesn’t require any special knowledge or work. I get the impulse but, I dunno. Economics. I just find it gross. Don’t @ me. I’m not that invested.

So, it is with that preface that I am sad to say that I recently became one of those people. 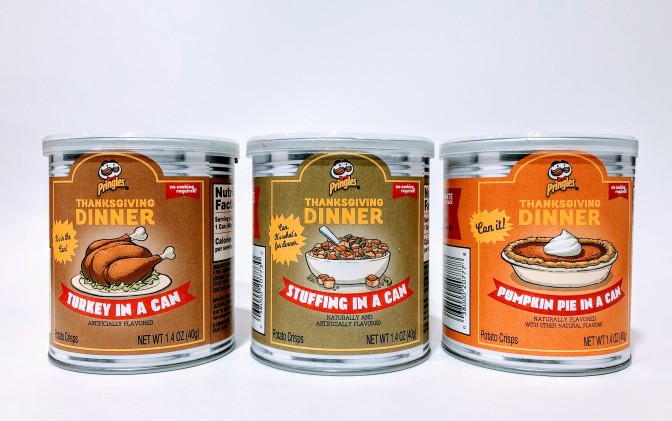 When I learned these Thanksgiving Pringles were going on sale at 11:59 pm, I was there and I was ready. And by there, I mean in my living room, and by ready, I mean shirtless with Pecan Sandies crumbs dusted about my short pants.

When the hour was nigh, the Kellogg’s Store website crashed instantaneously. Like at 11:59 and one picosecond. Because of course it did. Why would you make sure your website was ready to handle increased traffic from the promotion of your viral product? That’s just unreasonable.

So, while constantly refreshing and trying to snag one of these cans of chips, as the website was twitching, convulsing and gasping for breath, I ended up with two in my cart (also, the maximum number allowed). I was afraid that if I went back and tried to remove the extra one, I’d lose my spot in the queue, or lose the one I wanted, or just not be able to buy them at all, or however it works. I dunno. Economics. So, I kept and paid for both. 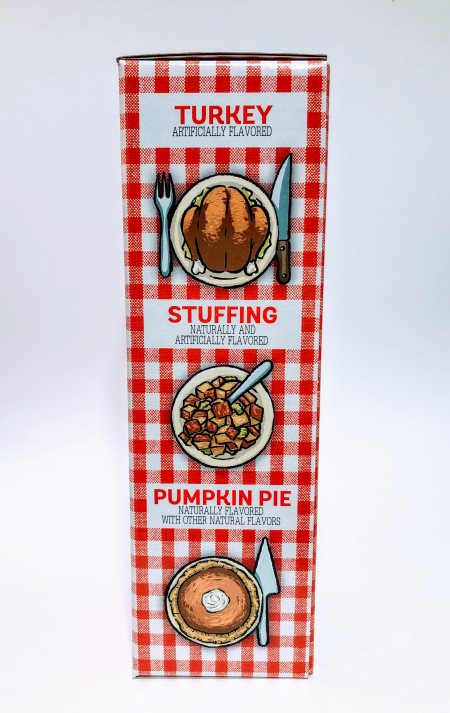 The next day, after seeing an article that they sold out in 41 minutes, in my shameful greed, I decided to throw the extra one on eBay. I put it up for an outlandish price because why not. If it sold I could by something nice for my wife for her birthday. It sold for an even more outlandish number, and now they are in the hands of the U.S. Postal Service, on their way to some other fellow lunatic who buys things like Thanksgiving Pringles.

I feel dirty and gross. But here we are.

One comical thing that came from this dalliance, is that I can unabashedly say that the most expensive food I’ve ever eaten, by any metric, are these Pringles. That’s just…I mean…that’s something. Sad, but something.

So, the chips. Three flavors: Turkey, Stuffing, and Pumpkin Pie. Thanksgiving staples all.
My favorite was the stuffing. All the flavor and herbfullness like that which is generated from the wonderful science of a delightfully dehydrated and rehydrated box of Stove Top stuffing. Have you ever just eaten dry Stove Top out of the bag? Because I definitely haven’t because that would be weird and I’m not weird I’m totally cool so shutup. These chips are great, and like stuffing, we should be eating more of them year-round. There’s no reason we shouldn’t.

Let’s skip to desert and circle back. I’m usually not a fan of sweet chips. I like my sweets sweet and my salts salty. However, these Pumpkin Pie chips are artfully executed. Just the perfect balance of pumpkin and pumpkin pie spies and sweetness. And pumpkin is listed in the ingredients! By name! To show it the proper respect it deserves. There’s barely any pumpkin when you actually buy a can of pumpkin! It’s a Thanksgiving miracle!

Lastly, Turkey. These were the least intense of the three. There’s some similar herbiness as the aforementioned Stuffing with definite onion and garlic flavors in the mix. Maybe a little too salty. But there’s a buttery flavor throughout that I really liked. I think they could have pumped up the turkey flavor a bit more though. It’s there, but there should be more. I like turkey.

All three of these flavors are really good. This is a very well put together, fun limited-edition product. It’s a shame they made such a small quantity. These would fly off the shelves and make a great pre-Thanksgiving-dinner conversation starter. But sadly, it seems like the only way you’ll get to try these is if you’re willing to shell out crazy amounts of money on eBay, or if you’re married to me, or if you’re one of my coworkers (we are hiring). That’s the opposite of a Thanksgiving miracle. That’s a bummer.